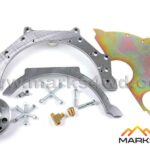 The transmission torque converter is coupled to the flywheel via a crankshaft adaptor. The adaptor has the Rover flex plate bolt pattern and spigot diameter on the transmission end with the GM crankshaft bolt pattern and spigot diameter on the engine end. This allows the Rover flex plate and torque converter to be bolted to the rear of the crankshaft adaptor, same as the old Rover V8 engine.

On the front of the crankshaft adaptor a flywheel is used instead of a flex plate, as there is no provision to support a flex plate when the starter motor is engaging.

The engine mounts have been designed to give you sufficient legal sump to differential clearance when used with a standard GM rear drop sump. See below for available

When fitting Chevy petrol engines the smaller 10.5″ 153 tooth flywheel must be used as the larger 11.0″ 168 tooth flywheel will not fit inside the original Range Rover / Land Rover bell housing.

A Range Rover / Land Rover clutch kit can be used but the GM flywheel will need to be re-drilled and tapped to accept it.