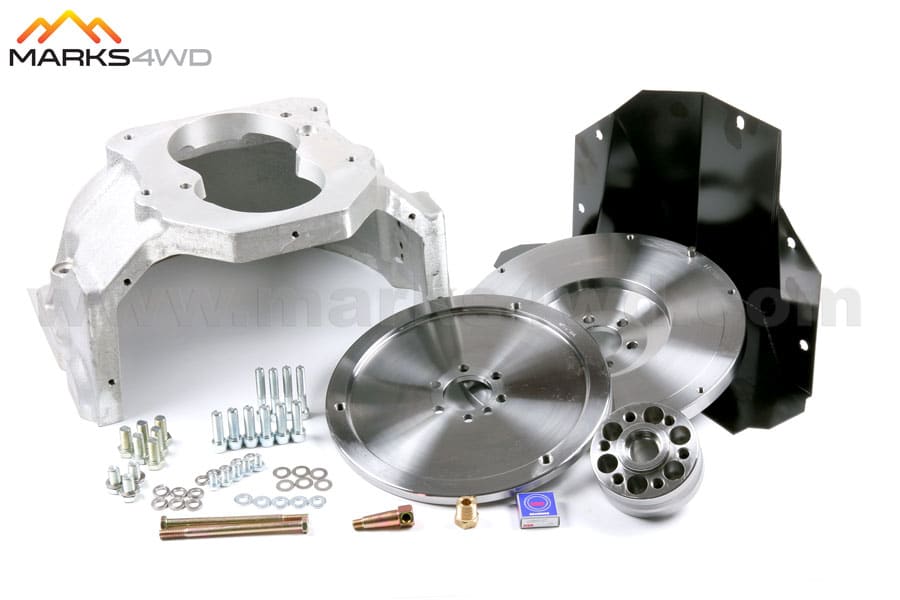 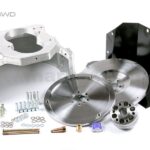 This kit comprises of a full replacement bell housing running a 3 piece steel flywheel. The new steel flywheel is the same design as the one used with the LS series engine kits. It is supplied with a flex plate stiffener which bolts up to the original GM flex plate, the stiffener is basically a very thin flywheel. A crankshaft adaptor/spacer is bolted to the crankshaft which also secures the flex plate/ring gear and flex plate stiffener to the crankshaft. The original GM flex plate with the 168-tooth ring gear is used. The new steel flywheel is drilled and dowelled to accept the standard LandCruiser 11″ clutch as fitted to FJ## series engines. The flywheel assembly is heavier than a standard flywheel, giving greater inertia allowing the engine to idle smoother. The extra weight also helps to give less chance of stalling the engine when off road, climbing over rocks, and taking off on steep inclines. The extra weight of the flywheel has no adverse effect on the engine.

As the flywheel setup requires the use of a flex plate having a 168-tooth ring gear you must make sure you have the correct Chevy starter motor.

Externally balanced GM engines can be used with these kits as the new flywheel setup utilises the original GM flex plate. The flex plate carries the ring gear and the balance weight for the specific engine.

When fitting the GM V8 to a BJ LandCruiser either a gearbox swap or a gearbox modification/rebuild is required. The input shaft in the BJ gearbox has a 21 tooth clutch spline and must be changed to a 10 tooth type as found in the petrol FJ## models.

Changing the input shaft allows the use of our kit part no. (MFK371#####). The new flywheel is drilled and dowelled to accept the LandCruiser 11″ clutch along with the new bell housing that measures 240mm/9.45″ in length. The new bell housing and flywheel combination have been designed to move the engine forward giving adequate clearance between the cylinder heads and firewall. Re positioning of the transmission or firewall modifications are not required with this kit.

Whilst using the payment system eWay you can be sure your information is safe and secure.
0
Your Cart
Your cart is empty
Continue Shopping
Calculate Shipping
Apply Coupon